"A tickle on his belly woke him.  He opened his eyes and he couldn't help flinching when he saw that a little yellow tip was appearing and disappearing through a crack in the egg.

He steadied the egg between his hind legs and thus was able to watch as the chick pecked and pecked until a hole opened large enough to allow a tiny, damp, white head to emerge.

Zorba didn't know how to respond.  He knew that his fur was coal black but he felt as if emotion and embarrassment had turned him pink all over." 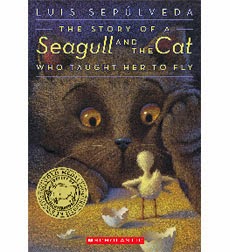 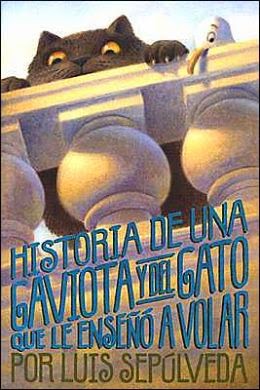 This story has a strong environmental message.  Kengah is migrating with the flock when she is trapped by an enormous wave.  On rising to the surface she is trapped in an oil slick.  It takes a huge effort but Kengah manages to fly to the shore.  She crash lands on a small balcony and meets a very special cat.  Kengah knows she is about to die but she is also about to lay her egg.  She asks Zorba the cat to make two promises - to care for her egg and baby and to make sure the baby gull learns to fly.

I picked this book up because I love the cover.  I have now discovered another book in our collection illustrated by Chris Sheban - The Lonely Book.  He also did jacket illustration for The Tiger Rising.  You can check out more of his art work in this Pinterest.

I read this slim volume in one sitting and by the final pages I had a huge smile on my face.  Zorba is so determined to keep his promise, his cat friends are very wise especially Einstein who loves to read encyclopedias, and you will find yourself cheering as Lucky takes her first flight.  This book would make a terrific read aloud.  The opening chapters alternate between Kengah and her troubles and Zorba and his early life. I should also mention the translator Margaret Sayers Peden.  I am so happy when publishers take the trouble to translate classic stories like this so it is accessible to an English speaking audience.

You can read a  Booktalk here and view an extract of the Film. 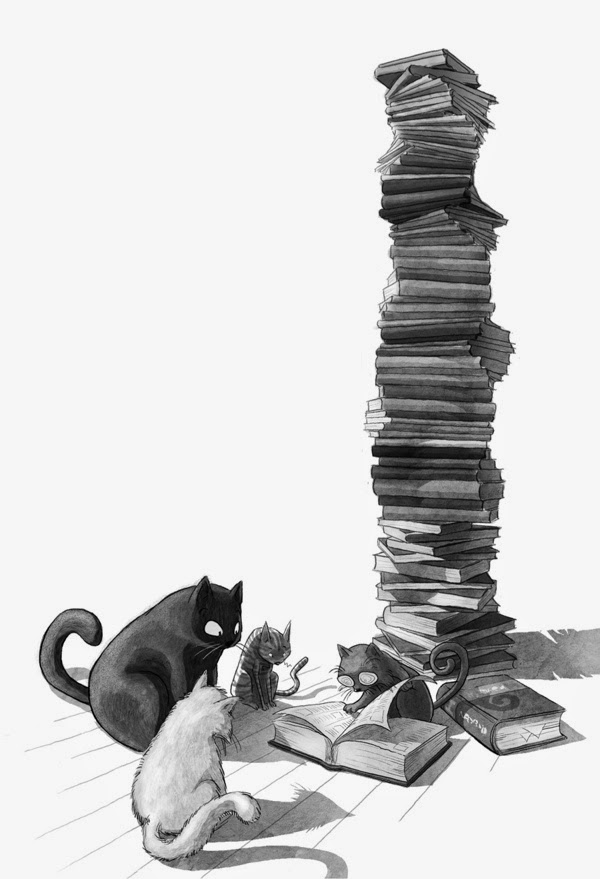