The Fox Girl and the White Gazelle by Victoria Williamson 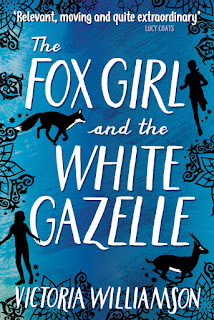 There are three disparate voices in this book.

Caylin, a girl from Glasgow, is barely surviving. Her mother is grieving and has turned to alcohol. Caylin has no money for clothes or food. She is reduced to bullying younger children at school and stealing their money. She has a tough exterior but underneath Caylin is terrified. Caylin names the fox Poppy. Caylin loves to run.

Reema is a refugee from Syria. Her father is unwell and her brother has been left behind in Syria and Reema and the family do not know if he is dead or alive. Reema wears a headscarf and suffers awful bullying at school. Reema has to take a lot of responsibility for her parents and younger sister because they cannot speak English. Reema names the fox Hurriyah which means freedom. Reema loves to run.

Reema moves into the same apartment complex where Caylin lives with her mother. Both girls, unknown to one another, discover an injured fox with two cubs in the back garden. The third voice in this book is the voice of the fox.

Here are some quotes from this book to give you a flavour of the writing:

Chapter 3 Caylin: "I shove her up against the wall and stare her tight in the eye until she shuts up and starts shaking. I've done this enough times to know that's all I have to do. All of the kids at school know my reputation."

Chapter 5 Caylin: "There's a big vinegar stain on my nightdress, but Mum's expensive vodka habit means we can't afford to buy laundry powder or the electricity to run the washing machine. We haven't done a clothes wash in ages. No wonder the other kids all laugh at me and never want to sit next to me in the dinner hall."

Chapter 12 Reema: "Then I realise Caylin is not staring at my scarf. It is the long braid underneath she is gazing at. There is admiration and more than a little envy in her eyes. She is not asking me why I wear a headscarf, she is asking me why I cover my long hair."

Chapter 18 Reema: "One of the boys snatches my hijab from my head before I can stop him and goes running off across the playground. ... The faded silk it fragile now, just like all of us who survived war. I cannot bear to see it torn to pieces in the careless hands of boys who have only every known peace and comfort."

Te Fox
Spring passes slowly, I grow ever restless.
My body is fragile, my leg does not heal.
The hunger is gone, instead fear gnaws my belly,
Bites at my insides by night and day.
With no den to hide them, my young are not safe here.


I finished reading this book several weeks ago but it had such a profound effect on me I just had to wait and draw a few breaths before I could talk about it here. This is a book for mature readers aged 11+. This is also an important book about overcoming adversity, making new friends, understanding difference and the journey to self acceptance. Neither girl in this book has an easy life but that is the power of this writing.  For a few hours you can walk in their shoes and hopefully gain a little understanding of a different life from your own.

You can hear Victoria Williamson talk about her book and read from the text. You can read part of the first chapter here.

I would follow The Fox Girl and the White Gazelle with The Present takers by Aiden Chambers; No Ballet Shoes in Syria by Catherine Bruton; The Weight of Water by Sarah Crossman; and Quicksand pond by Janet Taylor Lisle. If you love reading about the relationship between foxes and humans you should also read Pax by Sara Pennypacker.

Click these review quotes to discover more about Fox Girl and White Gazelle. I was so happy to see Kirkus gave this wonderful book a Star! This is a debut novel for Victoria Williamson.

This is a truly excellent book that is entirely appropriate for both primary and secondary readers. Williamson has created fantastic characters and a human, nuanced and ultimately uplifting story with plenty of heart. BookTrust

To sum up, the  writing in this book is beautifully simple and often powerful, really capturing the voices of its two female characters. This means the book can explore difficult issues, including immigration, bullying and child carers with honesty and a sense of realism. Storgy Kids

By alternating the two girls’ first-person narrations (punctuating them with the fox’s voice in verse), Williamson allows readers to quickly relate to both white Glaswegian Caylin and Syrian-immigrant Reema, seeing in them reflections of the many problems children face around the world today. Kirkus Star Review