What happens when ... by Delphine Chedru 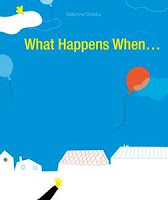 This is a book to be shared sitting with a young child.  Each page poses the question what happens when ... and the answer appears under a flap.  The answer has no words just a magical image which will make you smile.  Delphine Chedru has a imagination that knows no bounds.

Here are some of the questions from this book :

My favourite page is "What happens when my left sock slips behind the radiator?

This is a special book which you will want to revisit over and over again.  You can see some pages from this book here.
Posted by Momo at 4:17 PM No comments:

Just wanted to share some of the wonderful happenings in our school from last week - Book Week.  The slogan for 2013 Read Across the Universe was perfect for our daily thinking challenges and as an inspiration for amazing art work by our talented school art teacher and her students.

Monday we began with the first of our challenges - listed below followed by a performance of the Star Wars theme by our intermediate ensemble. At lunch over 150 young children enjoyed a library movie session and meanwhile all day we read the winning books The Terrible Suitcase and The Coat over the over again.

Tuesday we set our second challenge while jumping over piles of puzzles (146 entries) from the first challenge.  Lunch time over 100 children played card and board games in the library and throughout the day a number of children worked on space drawings which we plan to present to our Kindergarten children.

Wednesday was time for our third challenge and our first craft lunch where students from Year One worked on chickens, bookmarks, sunflowers, elephant masks and space pictures.  In case you are wondering one of the short listed books (which sadly didn't win was Peggy and this is why we made chickens and sunflowers.)

Thursday and the library was now filled to the brim with telescopes and space viewers not to mention library maps and alien library cards.  At lunch we had fun with our Kindergarten children who attended another craft lunch.

Friday was the final day of our hectic week.  At the morning assembly we awarded our final set of prize bags along with code cards and honourable mentions for students who put in an extra effort with one of our challenges.  Year two students came along to their craft lunch and left with three dimensional space pictures, little suitcases with space food stick packets inside, tissue paper collage horses, bookmarks and small cardboard rockets complete with cellophane flames.

Dear Miss L,
We are writing to tell you about our excursion to the planet, Ganob. We have been learning about "Reading Across the Universe". It was an amazing excursion!! We wish you could have been with us but we know Mr P needed you for Book Week. We hope you didn't miss us too much on Friday afternoon.
On the first day, we were all very excited. Toby was a little sad when he was saying good bye to his mum but he had his Rugby League book packed to cheer him up. Jack R tried to pack his surfboard but we had to tell him that there was no surf on Ganob. Holly had packed so many books to read on the rocket ride there that Mrs P had to tell her to leave some back at school. She decided to just take her Roald Dahl collection, her favourite author.
The Rocket Ride was a little bumpy and Jack W was a little rocket sick. It was probably because he had his head down reading, Freak Street, he should have held it up. He had to sit up the top of the rocket to make the nauseous feeling go away.
When we arrived on Ganob, we had a little difficulty communicating with the people of Ganob as they spoke their own language. However, you know Josh, he managed to communicate, he packed his Universal Translator book and we found where we were staying. Benji told them a joke from "Funniest Jokes" and they couldn't stop laughing. Planet Ganob looked like Earth but the only difference was the colours, everything was in different shades of purple. The water was purple, the sky was light purple and the plants were dark purple.
One day we went to Ganob Public School. You would have loved their library. They had books there that when you open them, you suddenly end up in the book. There was a book about the Olympics, Louis loved running on the Olympic track. Ella and Leila loved reading all the books that took them to lots of magical kingdoms. Alex and Luke opened "Surfing the Wave" and ended up surfing the largest wave on Planet Koodwa.
We went to visit their craters. They were like trampolines. James and Brayden disappeared for a long time as they were having so much fun but Brayden took some amazing photos on his i pad. We couldn't find William one day as he wore purple clothes and disappeared into the Ganob landscape.
We also saw a Ganob concert. Their dancing was very funny. But the funniest part was when Remy, Sammy, Indiana, Pia and Olivia joined in. This would have made Mrs Henderson really proud.
The food on Planet Ganob was really awful. Their food moved on the plate. Danika and Ruby were so polite that they ate it anyway and they even smiled. They were hoping to buy a Ganob cookbook to take home.
Hamish took his home made telescope with him. It was so good that we could see you, Miss L. You were up very late, every night during Book Week. We think you were looking at the amazing work the students  had done for your Book Week Challenges. You must have been very tired.
When it was time to come home everyone was feeling a little sad but especially Indy and Thomas as they had made some great new friends. They taught the people of Ganob how to play handball. We promised to send them some handballs when we returned to Earth. We even thought about sending some of our books that we have loved reading this year, Kumiko and the Dragon, the BFG and we thought they would really love Gooney Bird Greene.
Unfortuantely Isla missed out on the excursion as she was helping her mum prepare for the Plaster Stall for the School Fete and Tayah was sick. We hope they can make it next time!!
We can't wait to see you and tell you all about our amazing time on Ganob. Next time you are definitely coming with us!!!
Love from
Class 3.

Challenge One - make a puzzle using the slogan or short listed books. You might make a cross word, a find-a-word or a puzzle of your own design.

Best entry - a simple dot to dot of Peggy.

Challenge Two - You meet an alien and he interested in building a library on his home planet of Ganob. He would like you to prepare a floor plan or drawing of the library.  This alien is also interested in the idea of library cards.  You could make him a library card with his name and a barcode or other device he can use for borrowing.

Best idea - a library where you publish your own books.

Challenge Three - last night I saw some lights on the moon.  Some were still and others were moving. I am fairly sure someone is up there but we need a telescope or other space viewer to check this out.

Best model - the telescope that swiveled 360

Challenge Four - you are now taking a holiday into space to a planet of your choice.  The journey will be long so you will need a book to read along the way.  Write a letter home telling your family about your holiday.  You must include the name of the book you have been reading. The letter might be an email, a postcard, a tweet or some other way you devise to communicate from space.

Best letter - see the email above.  Best idea - including holiday photos with the letter.  Creative idea - a movie of a school girl receiving a letter from her mother who was on holiday in space.