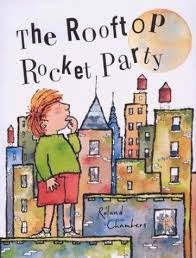 With such a large library collection as the one we have in our school it is interesting how some books bubble through and get my attention.  Last week our art teacher was looking for illustrations of day and night and the moon to inspire our youngest students.

As I did a search of our computer database under the heading night and day I came across The rooftop Rocket party.  I could not remember what this book was about but I knew it had made me smile when I read it years ago.  It did not contain any useful images for our art teacher but I bought it home to read.  Once again I have to give a warning that this joyful book is most probably out of print since it was first published in 2002.

This is a book that celebrates the importance of imagination. Pragmatism and scientific thought are important but perhaps real creativity comes from imagining the impossible.

Finn visit New York city.  Finn is curious about rockets and so he meets with Doctor Gass, a famous Rocket Scientist.  (Note the use of capital letters!).  The doctor will not share the secret of his rockets with Finn.  The doctor explains at length all known facts about the moon.  Finn goes to bed disappointed but that night he dreams about the Night Thing whose master is the Man in the Moon and he is holding a birthday party.  When Finn shares his dream, Doctor Gass is dismissive declaring it was 'just a dream'.

Finn notices there are rockets on all the rooftops in New York.  They are big and red and look ready for lift off.  Sadly once again Doctor Gass goes into a long explanation about the workings of water towers.

Luckily that night at "five minutes to twelve" the Night Thing comes again and he whisks Finn off in a red rocket to the Man in the Moon's birthday party.  Everyone has a splendid time and the food is delicious.    Next morning Doctor Gass can get no water from his taps and when he goes outside he finds a red rocket and a half eaten meringue on the sidewalk.

You might also enjoy Daydream Dan, Herman and Rosie which also has a NYC setting Humphrey's bear and Ned and the Joybaloo.

This book is perfect for everyone who holds fast to the belief that the moon is made from cheese and that one day it will be possible to meet the Man in the Moon.
Posted by Momo at 3:23 PM No comments: 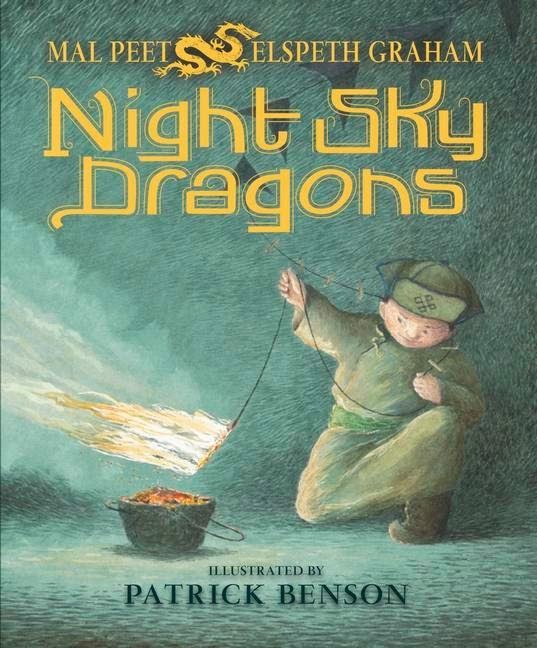 I have finally picked up a few books from the 2015 School Magazine Bookshelf selection.  These never disappoint and Night Sky Dragons is no exception.

This is the third book in a series by Mal Peet and Elspeth Graham. I adored Mysterious Traveller and Cloud Tea Monkeys by this talented writing team.

For each of these explorations of culture, travellers and the power of the individual, Walker Books have selected a different and wonderful illustrator. Cloud Tea Monkeys was illustrated by Juan Wijngaard, Mysterious Traveller is illustrated by PJ Lynch and now with Night Sky Dragons we have the award winning Patrick Benson.  It is important to mention the illustrations because these books are not quite picture books and not quite novels.  The measure 19cm X 23cm which for me is a perfect size to give these books some prominence in the library collection.

If you enjoy Nigh Sky Dragons you should look for The Kite Fighters, The firework maker's daughter and for an older reader A Single Shard.

The setting for Night Sky Dragons is Medieval Mongolia.  Yazul lives on the silk road in a place of refuge called a han.  "Within the han's high walls travellers and merchant caravans found shelter.  A place to rest and trade. A place of safety, too."  Yazul's father is lord of the han but the loss of his wife has made him aloof and stern.  Yazul finds comfort through his special relationship with his grandfather and the kites they make together but when Yazul shows his latest creation to his father things turn sour.  His father bans the making of more kites and sends Yazul to work as a servant in the kitchens.  One afternoon bandits arrive chasing a small group of traders.  The traders rush into the han minutes ahead of the bandits and the gates are firmly closed but now a siege begins.  The people are trapped inside with no access to water and food supplies that are rapidly disappearing.

How will Yazul, his grandfather and a kite or two save the day?  Will this change the relationship between Yazul and his father?  How does this all connect with the magic of fireworks?  You need to read Night Sky Dragons where all will be revealed.

Kirkus describe this book as dazzling and heartwarming.  You can read the first chapter.

Here is a wonderful description of the bandits :

"The bandits, perhaps fifty or sixty of them, had reined in their horses just beyond the range of arrow-shot.  Fierce men with beards greased into rat-tails, swords sheathed on their backs, bows handing from their saddles, quivers of arrows close to their knees.  They sat silently on their horses, watching, while the dust settled around them.  Then they slowly circled the han, studying it. Looking for its weaknesses." 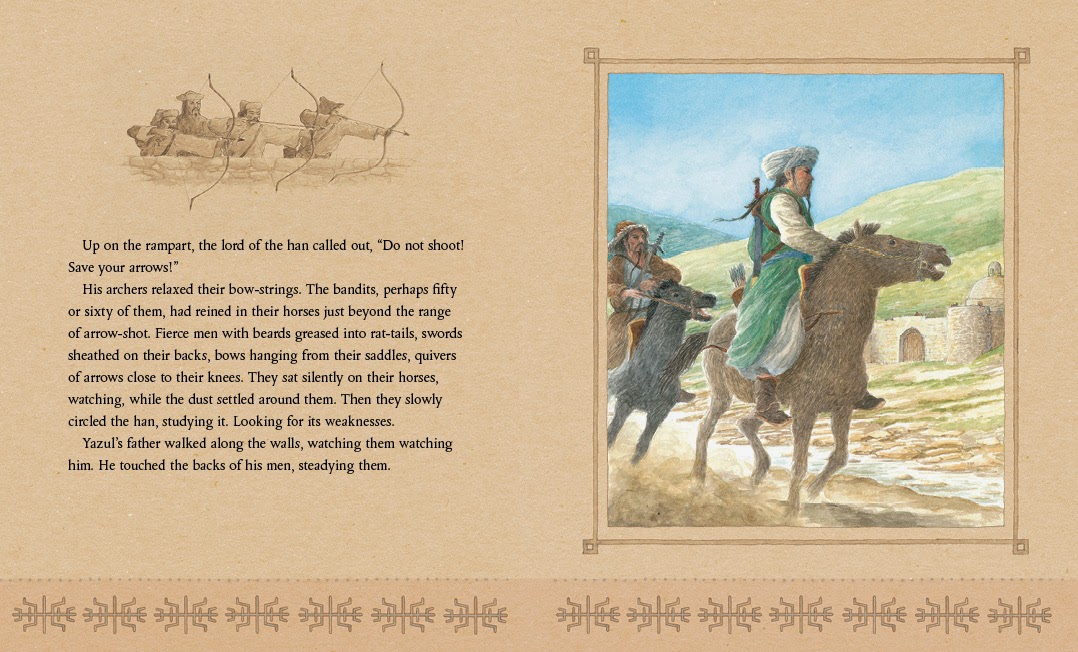 There are so many things that I adored about Withering-by-sea.  Here is a list : 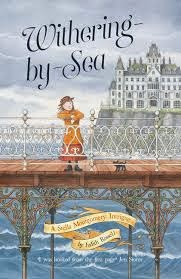 Stella is an orphan who lives in a seaside town in the Hotel Majestic.  The time is Victorian when young girls should be seen and not heard and a truly accomplished young woman has excellent deportment and embroidery skills.  Stella's aunts - the aptly named Aunt Deliverance, Aunt Condolence and Aunt Temperance -  live at the hotel so they can partake of the waters.  They have carved out a life of comfort and routine and they are determined to mold Stella into an appropriate young lady.

Stella takes refuge in an atlas which is a book that allows her to visit, vicariously, all the exotic regions of the world.  One morning while she is absorbed in her atlas and hiding in the hotel conservatory, she sees a hotel guest - Mr Filbert furtively place something in Chinese urn holding a potted plant..  Later Mr Filbert is murdered and his dying words to Stella are "Hide it. Keep it safe."

"The little bottle was corked and sealed with red wax.  It was heavier than it looked and as smooth as glass. ... (Stella) shook it and heard a whispering noise, as if something were slithering over shingle. ... A sinuous shape seemed to move inside the bottle ... It was beautiful but it made her skin prickle."

There is so much action in this book.  In just 250 pages you will find your self cheering for the good guy and hissing at the baddies somewhat like a Victorian melodrama.  You might anticipate the action but I am sure you will be wrong.  The twists and turns made me dizzy.  Here are some excellent teaching notes.  Here is a detailed review and the author web site.

If you enjoy Withering by Sea (and I am sure you will) you might also like to look for The Book without Words, Tensy Farlow and the home for mislaid children,  Three times lucky, The truth about Verity Sparks, and The remarkable secret of Aurelie Bonhoffen.
Posted by Momo at 5:38 PM No comments: 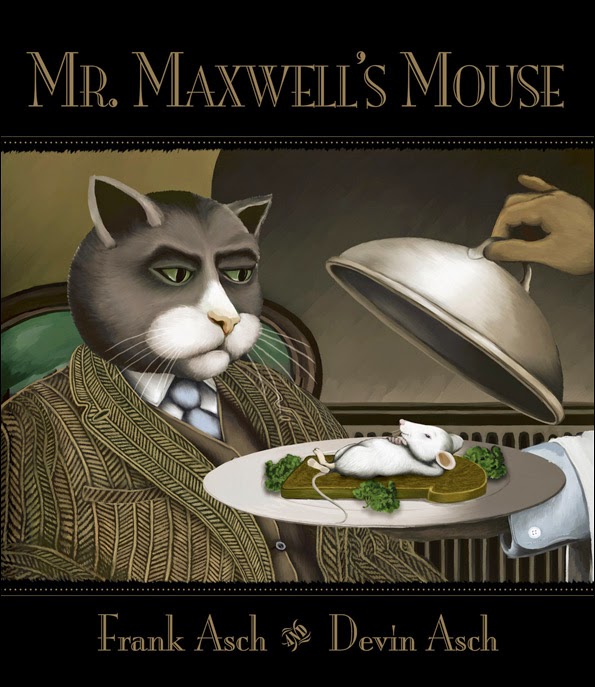 Today I spent some happy hours book shopping.  As I walked through one very large shop this book caught my eye - the mouse on the plate, the expression on the face of the cat and above all the author - the wonderful Frank Asch.  I knew at once Devin must be his son and after reading the first page I knew this book would be perfect.

I have been collecting books for a senior class on the theme of power - power in relationships, use of power, feeling powerless and so on.  This week we enjoyed discussing Extra Yarn and now I will add Mr. Maxwell's mouse to my list.

Mr. Maxwell dines each day at the delicious sounding Paw and Claw Restaurant.  On this day he decides to partake of a mixed green salad followed by raw mouse.

"Excellent choice, sir, Would you like us to kill it for you?' asked Clyde.  'That won't be necessary,' said Mr. Maxwell ... just make sure it is fresh and healthy."

The meal arrives - a mouse stretched out on a single piece of rye toast as if sunning itself on a sandy beach.  Our canny mouse engages Mr. Maxwell in conversation.  Asking for salt, suggesting the type of wine as an accompaniment and even asking Mr. Maxwell to say grace before - well before the deed.  Mr. Maxwell is not a religious man so the mouse kneels down and prays ending with the perfect word 'Amice!'

If you are looking for another book on the theme of persuasion this one is perfect and it also has such a delicious vocabulary and scrumptious illustrations.  This is a picture book for our middle and senior students.  This book is also an example of a trickster tale.

Here is a review if you need more detail of the plot.  Mr. Maxwell's mouse was first published in 2004. The paperback copy was released this year.

You might also enjoy Cat you'd better come home, The Spider and the Fly and Strat and Chatto.


a delicious cat-and-mouse tale in which small outsmarts large
Posted by Momo at 9:17 PM No comments: