Friday 12 noon we all held our breath and crossed our fingers across my school as we waited to hear the 2014 CBCA winners.  It was exciting to hear the cheers as one of our favourites The Swap won the Picture book Early Childhood award.

In the days preceding the big announcement our classes had voted and The Swap was a resounding winner for our Grade One and Two students.  We were also pleased about Banjo and Ruby Red, an honour book in this same section.

Only a small handful of students have read the Younger Readers category winner A Very Unusual Pursuit. It can be difficult to tackle a long novel in our short library sessions but I enjoyed this one so much - it clearly stood out as a winner from the other short listed titles in this section. Our classes will enjoy extracts this week and we will purchase a small set for use with reading circles.

I told the whole school to listen for my screams if Silver Buttons didn't win! It didn't! But I held in my screams because this magical book did receive an honour in the Picture Book of the Year category.  The winner for this important section was Rules of Summer by Shaun Tan.  This is a book that needs to be read and then re-read.  You might like to compare Rules of Summer with the short stories in Tales from Outer Suburbia and the illustrations in What Miscellaneous abnormality is that? : a field guide. In fact looking at the whole body of work from Shaun Tan should allow you to make connections within and between his intriguing books.

Here is an excellent review of The Rules of Summer.  This one from Kirkus is also fabulous. Shaun Tan himself has several very informative and generous videos on his web site.  Shaun says :

... there are about 25 of these paintings,…together they form almost like a map of a particular kind of childhood experience which centres around the activities of these two boys, it’s a relationship that is both very friendly and caring but also antagonistic and towards the end of the book begins to disintegrate before finding some kind of redemption and coming together again.

Here are some excellent teaching notes.

The slogan for Children's Book Week in Australia this year is 'Connect to Reading'.  We have a huge week of happenings planned including special lunch activities every day and creative thinking challenges for our Grade 3-6 students based around this slogan.   You can review all the winners and honour books here. 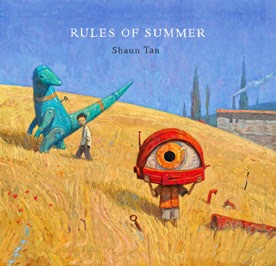 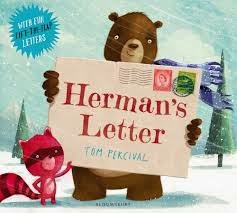 One of my favourite ways to discover new books is when they are recommended by the readers in my school library.  A few weeks ago we held our annual library Donate-a-book.  A big thank you to the generous parents who supported our library in this way. We have been able to add over 800 new books into our collection.

Among these books was Herman's letter and when it was returned earlier this week I asked the little girl and her mum if they had enjoyed it.  Their answer was a resounding YES!.  The mum then turned the pages and shared her favourite parts - both especially liked the 'real' letters that form part of this story.

This book shows the way illustrations beyond the text in the best picture books.  Think about these words - "They had great fun inventing their own games and they even had a secret club with a secret code and a TOP SECRET handshake."  Now I will tell you Herman is a large brown bear and Henry is a small, red raccoon.  I adore their handshake.

Life for these special friends is good until one day Henry moves away. Henry misses his friend and so he writes letters but sadly the letters only serve to make Herman feel jealous.  Herman does not write back to Henry until this important letter arrives :

"Dear Herman
I hope you are well.  I haven't received ANY of your letters.  There must be a problem with the post or something.
I miss you so much!
You're my best friend in the whole wide world.
Please say you'll come and visit me soon.
Love Henry"

Herman does write back but then he has a terrific idea - he will deliver the letter himself.  He embarks on a long and dangerous journey made even harder by the fact that it is now time for this bear to hibernate.  The twist at the end will make you smile.  Take time to watch the trailer made by the publisher.  Here is a set of teaching ideas.

If you enjoy Herman's letter then you should also look for Toot and Puddle Wish you were here by Holly Hobbie and Christmas Bear by Sal Murdocca. 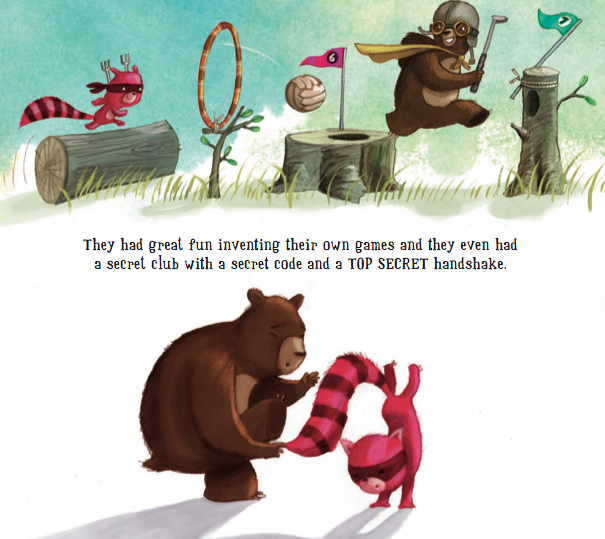 Tua and the elephant by RP Harris illustrated by Taeeun Yoo 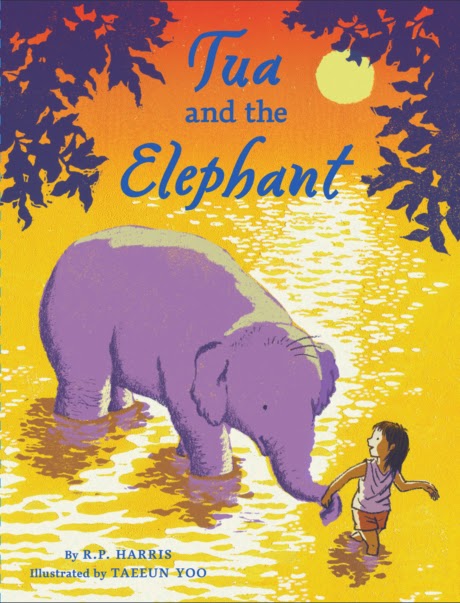 If you need to explain determination to a young child look no further than Tua and the elephant.  This is very special little novel which will introduce younger readers to Tua who is determined to protect her new friend - a baby elephant.  This book will also give you a very authentic insight into the culture of Thailand - the sights, sounds and smells.

Tua means peanut but Tua is not a peanut she is a brave little girl who shows enormous courage when she sees a small elephant is being very badly mistreated by some  opportunistic thieves. "These two ... were scruffy as sewer rats, beady eyed and sharp of tooth. Whiskers grew in sparse patches on their cheeks and chins like mildew. They were both shifty, but one was long and lean, and the other was squat and pudgy."

Woven into this story are many Thai words but these are not hard to work out from the context.  There is a glossary but I rarely referred to it.

Tua rescues the elephant whom she names Pohn Pohn which means double happiness. The difficulty is how do you hide an elephant especially when the aforementioned bad guys what this prize possession back.  Tua must use all her courage, commonsense and initiative to take Pohn Pohn on the long journey to an elephant refuge where she knows she will be safe.

Tua and the elephant is a fairly short novel at just 200 pages but there are moments when I simply gasped out loud hoping Tua could escape the two crazy elephant thieves.  In one scene near the end of the book Tua herself is tied up in the hammock where she is sleeping and kidnapped.  This time it is Pohn Pohn who comes to her rescue.

I will admit I might have walked past this little book in the shop if my friend and fellow Teacher-Librarian had not recommended it. Another reason why it is fun to shop for books with a friend. Here is a set of very comprehensive  teaching notes and here is a set of web links to extend your study of the setting and culture of Thailand.  Take a minute to watch this video trailer where you can see some of the illustrations from this book.

If you enjoy Tua and the Elephants I recommend you also look for Silk Umbrellas by Carolyn Marsden.


The plot unfolds quickly and involves a kitchen sink of obstacles and allies: a Chevy Chase-style scene in a vegetable market, a treacherous river crossing, delightful teenage monks, an elephant-­kidnapping, ransom negotiations, and high- (and low-) speed chases as the devious mahouts search for Tua and the elephant.
New York Times
Posted by Momo at 5:01 PM No comments: