On pages 48 and 49 of Robot Riot Andy Griffiths has the top ten list of things you should never do to a book as written by Mr Shush the Teacher-Librarian at Northwest Southeast Central School. I first met the wonderful (highly stereotyped) Mr Shush in Pencil of Doom. Robot Riot is the fourth book in this funny Schooling around series.

Never lick the print off a book, no matter how good it tastes
Never put a book in a fish tank even if it is a book about fish
Never attach wheels to a book and use it as a skate board
And never attach two ropes to a book and attach one end of each rope to a horse and then move the horses away from each other until the rope tightens and the book is ripped apart!!

There is a new kid at school and our hero Henry McThrottle is immediately suspicious. She seems to be too good at everything including art and Henry's speciality - writing. Now all Henry has to do is convince his friends, especially Jenny Friendly, that Roberta is not to be trusted!

I did enjoy Pencil of Doom more than Robot Riot but there were some funny moments. I kept hoping Roberta really was ….. whoops I won’t give it all away. I do enjoy stories about Robots. Eager and Eager's Nephew by Helen Fox are two books on my top 50 all time favourites list and I really enjoy reading Parker Hamilton a short story by Robin Klein in her anthology Ratbags and Rascals.

I wonder if Northwest Southeast Central School will win the tidy school competition perhaps we will find out in the next exciting installment. If you want a quick, funny book with heaps of characters, kids and teachers, that you recognise from your school then pick up a copy of this book today.
Posted by Momo at 5:31 PM 2 comments: 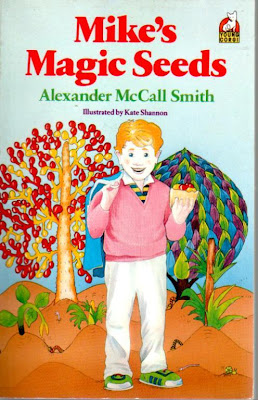 Mike’s Magic seeds is an absolutely perfect book for young readers. It has all the right elements of magic, friends and lollies!

Mike is walking past the shops one day on the way to school and he sees a closing down sale on a little shop he has never seen before. Feeling curious and with a few coins in his pocket he goes inside. The shop keeper is a grumpy man who seems to trick Mike into buying, of all things, a pain paper packet of seeds. At home Mike reluctantly looks more closely at this packet and he discovers some very odd instructions about planting certain seeds on certain days.

Since it is a Friday he plants, as instructed, the white seed. This is the first time Mike has ever done any gardening and he feels a little thrill of anticipation wondering what will grow. The actual plant is such a surprise for Mike and for the lucky reader.

The sweets you see on the cover of this book are slightly foreign for our Aussie kids but I just tell my listeners to imagine their personal favourites. Mike grows sweets that sound a little odd to us - marzipan, sugared almonds, chocolate flake and fig rolls.

The lessons along the way about patience and more importantly about true friendship make this book an important reading experience. Right from the start we know Mike should not trust Angela!

Once again this lovely little book is sadly out of print but I would say if you come across a copy grab it with both hands and don’t let go. Yes this is the Alexander McCall Smith who has lots of famous adult fiction too.
Posted by Momo at 5:59 PM 1 comment:

35 Kilos of Hope by Anna Gavalda

I always recommend 35 kilos of Hope by Anna Gavalda to boys in senior grades who are reluctant readers. Not because it is a book of slap stick humour that will give them heaps of laughs but because it is a truly sensitive story that might get them thinking and it is presented in a very easy to read format. The print size in this book is perfect for boys and there is heaps of white space so as you read the pages just fly by plus there are only 110 pages so this should be a quick read. With all this in mind I recently gave this special little book to a Year 5 boy. He returned about 2 weeks later and told me this story was so powerful. It really affected him emotionally! This might even be the first complete book this boy has read!! Yippee!

In 35 kilos of Hope (named 95 Pounds of Hope in US!!) we meet our hero Gregory just as he is about to begin school. He attends for the first morning, comes home for lunch and then it is time to go back. “No. I’m not going … Because I’ve already been. I’ve seen what it’s like, and it’s not interesting.” Unfortunately, as we know, Gregory will have to attend school, at least until he is fifteen. School is torture for our narrator. He finds the work impossible, his days leave his stomach in knots and PE is terrifying. Gregory does have abilities – special abilities with his hands but these are rarely used or recognized at school and so inevitably he is expelled. He has three years of school still to endure. The only place open to him seems to be boarding school so Gregory writes a letter.

Dear Sir,
I would like to go to your college but I know that it is impossible because my school record is too bad.

In your brochure, I noticed that you have workshops for mechanics and carpentry. You also have computer labs and greenhouses etc.

Personally, I think that good marks are not all there is to life. Motivation is just as important. I would like to go to Granfield because I’m sure I would be happy there. At least I think so.

PS This is the first time I have ever begged someone to let me go to school. I think I must be ill.
PPS I am sending you the plans of a banana peeler that I built when I was seven.

The one place where Gregory feels happy is with his Grandad Leo working in his shed. Grandad knows all the special qualities and abilities of Gregory but will this be enough to save him?

Soon I will be talking to some important people about books in translation that have influenced me. I have a big dilemma – 35 Kilos of Hope was originally written in French, Momo was written in German and my other choice Rose Blanche is an Italian book. Which will I choose?

Make sure you take a look at the back cover of 35 Kilos of Hope it is fabulous!
Posted by Momo at 2:58 PM No comments:

Percy Jackson and the Lightning Thief by Rick Riordan 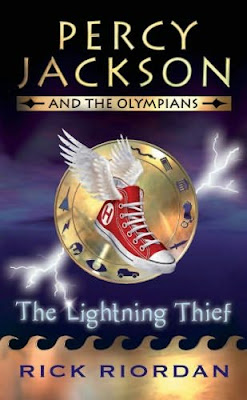 There are times when reading feels like an addiction and a book like Percy Jackson and the Lightning Thief is a great way to feed that addiction. I seemed to have missed the movie but I was sure we had this book in our school library so when it was returned last week I quickly grabbed it ready to read.

I sat down thinking, you’ve heard me say this before, I would just read a few pages or perhaps the first chapter to see what this book was like. I didn’t lift my head for 72 pages! In fact I had to speak sternly and order myself to turn off the light – after all it was a school night.

Now for the addiction part - it has been a rather busy week and I just didn’t have a few continuous hours to sit and read Percy Jackson and the Lightning Thief so I had to snatch time when ever I could. This included reading chapters over breakfast and wishing I could just stay home for the day and keep reading.

Finally last night I finished Percy Jackson and the Lightning Thief and I am now desperate for the sequels. Percy, or Perseus, is a half-blood but not like the ones in Harry Potter, these half bloods are the offspring of the Gods. Gods like Zeus, Poseidon, Athena, Ares, Apollo, Hermes, Dionysus, Aphrodite, Demeter, Hephaestus, Dionysus and Hades.
Percy doesn’t know he is a half-blood but the signs are obvious to those who can recognize them.

As Annabeth explains : “You wouldn’t be here if you weren’t one of us … I bet you moved around from school to school. I bet you were kicked out of a lot of them…. Diagnosed with dyslexia. Probably ADHD… that’s because your mind is hardwired for ancient Greek. And the ADHD – you’re impulsive, can’t sit still in the classroom. That’s your battlefield reflexes.”

Someone has stolen a lightning bolt from Zeus and the gods are preparing for War. On earth this will be World War III. Percy our hero is really Perseus, the son of Poseidon and he must go on a quest to find the lightning bolt. Zeus blames Poseidon for the theft but others think it is the work of Hades who wants to increase his power. Before embarking on the quest Percy has an audience with the Oracle… you will go West, and face the god who has turned, you shall find what was stolen and see it safely returned, you shall be betrayed by one who calls you a friend, and you shall fail to save what matters most, in the end. This is all very heavy stuff.

Percy, Annabeth and Grover (a Satyr and Percy’s best friend) do indeed need to travel to the West. I almost reached for an atlas to plot their journey across American from New York to Los Angeles and back again.

Very early in the story Percy fights a Minotaur and later he meets the Furies, Medusa, and three women cutting threads – the Fates.

I first fell in love with these figures of mythology after reading The god Beneath the Sea by Leon Garfield and Edward Blishen.
Reading Percy Jackson and the Lightning thief will give readers a terrific introduction to all these wonderful, horrifying, magical and powerful figures. If you have finished with Beast Quest and are ready to try a much longer novel (374 pages) get your hands on Percy Jackson and the Lightning Thief I highly recommend it.
Check out the web site for the series it is amazing. You can even listen to parts of the books. The author also has a great site. For teachers here are some discussion questions - you could build a whole term of work around this novel by making an in depth study of Greek mythology. The Scholastic edition, Puffin edition and the one on the author web site all have such different covers - ours is in this blog.
Posted by Momo at 8:33 PM No comments: