The museum of Mary Child by Cassandra Golds 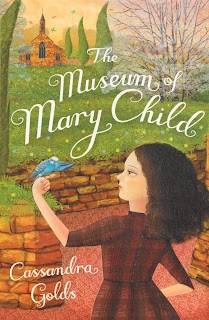 Have you read Coraline by Neil Gaiman? I found that to be a very disturbing book so be warned The Museum of Mary Child is also oddly disturbing. I discovered this title during our library stocktake and as it was one I had not read and because I loved The Three loves of Persimmon by Cassandra Golds (and her other title Claire du Lune which also lingers in my book memory) I picked it up to read.

I found the first two thirds of The Museum of Mary Child very difficult to put down but then the final scenes were so disturbing and yet I was somehow drawn to keep reading.

Heloise is an orphan who lives in austere and controlled environment with her harsh godmother. There is no colour in Heloise’s life. Even her bible has been censored so she cannot read large sections. Heloise spends her days sewing drab clothes for the neighboring orphanage and she herself is dressed in these same tones. Heloise does however, have a dream. She longs for a doll both as a plaything but more importantly as something to love. Finding a doll hidden under the floor of her room puts Heloise in great danger and sets her on an amazing adventure in search of her identity.

If you have read Fearless you will certainly want to read The Museum of Mary Child. Be warned though, this is not a book for a very sensitive reader. There are girls in our senior Primary classes who I think would enjoy The Museum of Mary Child. You might also enjoy People Might Hear you by Robin Klein (long out of print but in our library) and The Emerald Atlas. One final thing you might like to take a look at the alternate cover because I think it does show the sinister tone of this story in fact this review calls this book Gothic which is a term I did not think of but it is absolutely correct.
Posted by Momo at 9:38 AM