With my knife by Andrew Lansdown 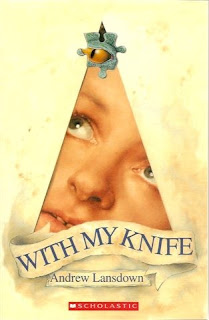 Colyn lives on a potato farm with his dad. His mum has died many years earlier. One day Colyn finds an old knife buried in a paddock. He uses the knife to whittle a potato and discovers the knife has an amazing power. The potato turns to stone and when discs of this stone are thrown up into the air a light as bright as the moon is emitted. This stone is also incredibly sharp.

In the shed there is a discarded box, a large box that once contained a refrigerator. Colyn decides to turn the box into a cubby. It needs a door and so Colyn cuts a large triangle into the front of the box. This is his first very significant mistake. The shape of a triangle is mysterious and ancient. Colyn also carves his own name into the bark of a tree. Luckily a dream warns him about the power of names and he is able to obliterate this before more troubles can be unleashed.

The triangle in the box has opened a doorway to Klarin. The dragons can now come through to our world. Colyn carves himself a dog companion called Kinzar and with the help of his dog, his knife and the army of Kinroan led by Wayth the dragons are defeated but not with out enormous casualties.

“Colyn leap to his feet and thrust the knife up with both hands. The blade sank into the dragon’s throat. There was a gurgling sound and hot blood gushed down onto him.”

Meanwhile Colyn and his dad have been working on an old jigsaw puzzle. As the picture is finally revealed they see a scene involving his mother in Klarin with the dragons. This certainly opens the way for the two sequels.

If you love battles and dragons and you long to demonstrate your courage and compassion as Colyn our hero does then you must read With my Knife. You might also like the Ranger's Apprentice series by John Flanagan, A wizard of Earthsea by Ursula LeGuin and the Dragon Keeper series by Carole Wilkinson. You should also look at books by Linda McNab.

With my knife is a book I have been recommending to my students for many years so I was happy to discover, when I re-read it this week, that it is such a powerful story. This book might be out of print but I am sure you will find a copy in most Australian school libraries. You can read the first chapter and some reviews on the author site.
Posted by Momo at 4:25 PM