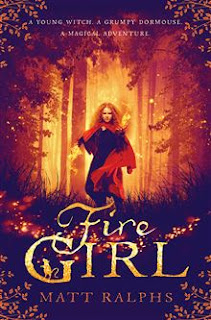 Here is the perfect book for fans of Skulduggery Pleasant and the Catherine Jinks series which began with A very unusual Pursuit.

Before reading this review take a look at the trailer.  It is utterly enthralling as is this book.

Hazel watches as her precious mother is kidnapped by a demon. Her anger brings her own powerful magic to life - the magic of fire.  With the help of her familiar - a dormouse named Bramwell, Hazel sets out on an extremely dangerous journey to find and free her mother.  The world is an especially dangerous place because witches are being caught and killed all over England.

One of the ways I can explain this book is by quoting some of the chapter headings :

"After the Witch War, England's witches fled to the wild parts of the land. It is best to avoid such places, unless travelling with adequate protection."

"Demons are unholy creatures in endless forms most foul."

"When prosecuting a witch, Witch Hunters are encouraged to use fear and intimidation to extract information."

Fire Girl is not a book for the fainthearted.  There are some really gruesome scenes in this book especially when the demon consumes the woodsman.  I read this book quickly but I did need to stop when the action became quite harrowing.  On the other hand, characters like Bramwell will give you plenty to smile about and the bravery of Hazel will make you cheer.

Here is an extract from the scene with the demon :

"The tentacles whipped round, and in the time it took for a heart to beat twice they were on him. ... The fifth tentacle - thicker than the others - reared up like a cobra and swayed hypnotically from side to side.  There was a wet tearing sound as its tip peeled open like a flower, revealing a round, toothless throat.  The woodman wen rigid as it descended towards his head."

Here is an interview with the author.  Here is a review by an eleven-year old.

After reading this book - and I really do recommend you read it -  especially if you are a fan of this horror fantasy genre, you might also like the Chain of Charms series of books by Kate Forsyth which have the same setting of Cromwell's England for a slightly younger audience.

I should warn you this book is the first in a series, many things remain unresolved at the end and the second installment is not yet published.