One important section in our school library contains our short chapter books which we call Fast Fiction. These are little books which contain easy to read stories suitable for our students in Grades 1-4 but which also have very satisfying story lines.  I love hunting for new titles to add to this collection.

Fizz and the Police Dog tryouts has all the right ingredients.

1. It is part of a series - we do have the second book Fizz and the Dog Academy rescue and the next two will arrive soon.
2. It has a fast pace and very satisfying story. You will cheer for little Fizz who is trying so hard to become a police dog against all stereotypes.
3. With eight short chapters this book could easily be read in one or two nights and I do enjoy chapters with names - this can be a good way to predict the plot
4. There are illustrations on every page and these add to the fun.  Steven Michael King certainly knows how to capture the personality of a range of dog breeds
5. Fizz is a special little hero who demonstrates determination and problem solving 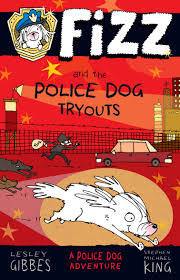 When you look at the cover of Fizz you might see a resemblance to Mutt Dog also illustrated by Steven Michael King.

Fizz turns up for the tryouts but so do a huge number of other dogs.  One of these is Amadeus, an enormous German Shepherd from the Wolfgang family.  Here is a description of Amadeus.  "His neck was thick and strong, and his massive chest was set between two muscular sloping shoulders.  His dense fur was as black as midnight, and his eyes were cold and cruel."

Here is a description of Fizz "a small cute ball of white, fizzy, fuzzy fur."

Amadeus looks like a police dog but he is a bully. He wants to win at all costs but it is his cheating and mean behaviour that nearly sees him disqualified.  Fizz passes the first two tests - The Bark Test (Amadeus steps on his paw and Fizz screams at just the right moment), and the Scare Test (Fizz uses his anger against Amadeus flashing his teeth and shooting his fluffy hair into wild hackles).

The third test, however, the Chase-and-catch test, proves too much of a challenge for little Fizz but all is not lost.  Fizz is offered a place in the Undercover Dog Division and the stage is now set for book two. 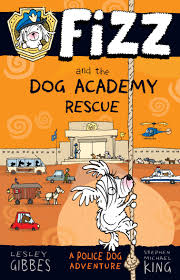