Somewhere else by Gus Gordon

Today my friend from Kinderbooks and I went to a local bookshop to meet Gus Gordon and hear about his new book Somewhere else. 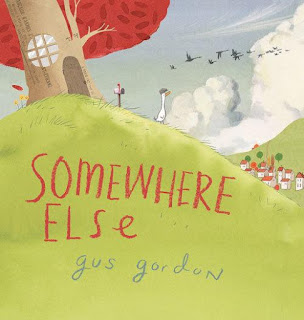 I have been a Gus Gordon fan for a long time.  Wendy is such a terrific book but it is Herman and Rosie that made me really fall in love with his style.

It is always special when an author explains the inspiration for a book and the time with Gus was made even better when he showed us his sketches and story draft.  This little video is a 40 second preview.  Here is a radio Adelaide interview.  Here is another interview on the author web site.  Gus spent some time in Paris and while he was there he sketched a picture of a duck standing outside a patisserie. This is just one of the fragments of inspiration that led to the book we saw today.

George is too busy to go exploring the world.  He has cakes to bake, a full ironing basket (really - take a close look at this page) and a yoga class.  His friend Pascal arrives and, even though he is a well meaning friend, there seems to be no way he can help George then they see an amazing poster in the newspaper.

Take a look at this long list of books with illustrations by Gus Gordon including some terrific Aussie Bite titles such as A Home for Gnomes.  He also illustrated one edition of the ABC Sing book.  You can read more about the plot here in this review from Kids' book Review :

Somewhere Else is a joyful book, with lovable characters and a beautifully-crafted message about both the thrill of travel ... and the just-as-good delight to be found in returning home.

You might also enjoy A wish for Wings that work, Ducky's Nest, Flight of the Dodo by Peter Brown and Duck by Randy Cecil.

Other things to know

Finally Gus did not talk about this but I do like the way he includes stamps.  Wish I had thought to ask why?  There are postcards and stamps in Herman and Rosie too.  I will make the bold prediction that Somewhere Else will be short listed for the 2017 CBCA award.  Fingers crossed. 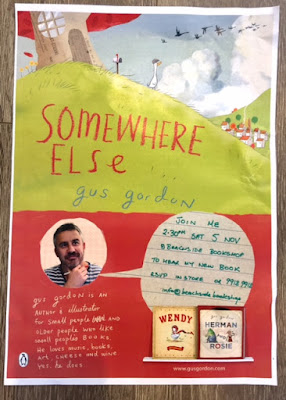