ANZAC Day is commemorated next week and in our school students prepare and present a moving service each year.  We have so many excellent books suitable for all ages in our library which allow students to gain some understanding of the events surrounding World War I and II along with other more recent conflicts. Some focus on individuals, others on major events such as the landing at Gallipoli while others explore courage and heroism.  I have included a little quote from each book to give you an idea of the tone and content.

My Grandad Marches on ANZAC day by Catriona Hoy and Benjamin Johnson
"He wears his best jacket and has shiny medals on his chest.  He doesn't have much hair on his head but he does have a big moustache." 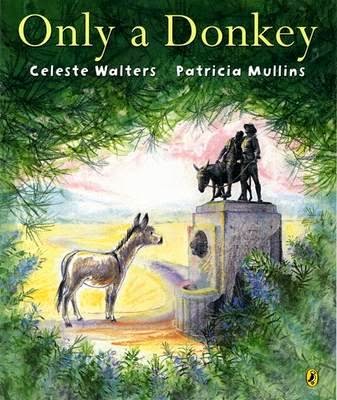 Only a Donkey by Celeste Walters illustrated by Patricia Mullins
"I was a donkey who served in a war that was fought long ago in a place far away, and many young soldiers who fell would have died, except for one man who just followed his heart.  At the sound of his voice I was willingly led.  With his hand on my halter, sure-footed I trod."

The Bantam and the solider by Jennifer Beck illustrated by Robyn Belton
"Food became scarce, and Arthur and his companions collected grubs and worms for Bertha from the muddy banks of their clay prison.  And she rewarded them.  In the midst of a raging battle, when the sky was crisscrossed with fire, Bertha laid a warm brown egg.  When Arthur found it, he hugged the little bantam to his mud-caked jacket."

Gallipoli by Kerry Greenwood illustrated by Annie White
"The ANZACs had been at Gallipoli for months now.  The weather was hot, and they were sweaty and dirty. Insects bit them day and night.  Sometimes they got letters and presents from home. Bluey opened a parcel wrapped in brown paper with string. 'Fruit cake and tins of apricot jam!"

The house was built in a day Anzac cottage by Valerie Everett illustrated by Barbara McGuire
"A proud community gazed upon its achievement. On a street in their suburb stood Western Australia's first Gallipoli memorial, a house that could never be sold.  The Australians who fought and died would live on in their hearts and memories..."

ANZAC Biscuits by Phil Cummings illustrated by Owen Swan
"The farm was quiet.  Rachel and her mother were in the kitchen.  The fire crackled and Rachel was warm.  'Let's make some biscuits for Dad,' her mother said.  'Yes, let's!' Rachel cried."

"Snow was falling.  The solider turned his back to the bitter cold. He lifted his collar and lowered his unshaven face to feel the warmth of his own breath." 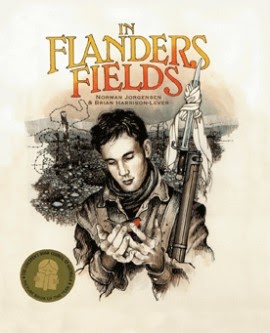 In Flanders Fields by Norman Jorgensen and Brian Harrison-Lever
"A brightly coloured robin is trapped.  One wing is flapping helplessly. The bird is unable to free itself from the tangle of deadly barbs."

Photographs in the mud by Dianne Wolfer illustrated by Brian Harrison-Lever
"Hoshi and Jack stared into each other's eyes. Then Hoshi rolled closer, groaning with the effort.  Scalding pain burned across his chest as he held out the picture."

Present from the past by Jennifer Beck illustrated by Lindy Fisher
"Princess Mary, who was the only daughter of the King and Queen of England at the time, decided that she wanted to give a special present to all the allied troops serving overseas."

Anzac Day parade by Glenda Kane and Lisa Allen
"Sixty years since he saw the battle when ninety-three mates got blown away by cracking mortar and machine gun rattle, now names on a plaque at the RSL."

The Red Poppy by David Hill illustrated by Fifi Colston
"Of course! The puppy would show they were near a patch of flowers. Jim put the flower into the pouch too, then looked into the dog's eyes.  'Hurry, Nipper.' The tail wagged again."

Lofty's mission by Krista Bell illustrated by David Miller
"Sorry, lad.' Frank McNamara was firm.  'The army needs top homing pigeons as messengers. Your Lofty, Number 371, is our best squeaker ... just what they need up in New Guinea."

Meet the ANZACS by Claire Saxby illustrated by Max Berry
"The ships docked at Cairo after six long weeks at sea.  The Australians and the New Zealanders set up camp side by side, close to the pyramids.  The air swirled hot and fierce, full of sand." 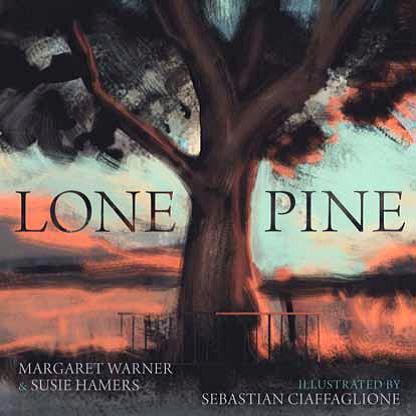 Lone Pine by Susie Brown and Margaret Warner illustrated by Sebastian Ciaffaglione
"The soldier looks down.  He stoops and plucks a pine cone that is still clinging to a branch.  Holding it up, he breathes in the fresh clean scent of pine. He thinks of his mother's garden where he used to play with his brothers.  The soldier slips the pine cone into his pocket.  It is a reminder of this sad day."

Do not forget Australia by Sally Murphy illustrated by Sonia Kretschmar
"Billy tried to imagine what it would be like to have your home destroyed, or to have no school to go to every day. And he wondered if there was anything he could do to help the kids of Villers-Bretonneux."

Memorial by Gary Crew illustrated by Shaun Tan
"But the tree's a memorial,' I say. 'The same as the statue - except the tree's alive and the statue's just rock and concrete. And the tree's full of birds and fruit bats and possums. Whole families, like ours.  The council wouldn't cut the big tree down, would they, Old Pa?"

The Poppy by Andrew Plant
"The poppies nod in the winds that blow over the Somme.  Their petals turn the fields red where once they were stained with the blood of the fallen."

Harry and the Anzac Poppy by John Lockyer
"A small wooden box was on the floor beside the chair.  Harry picked it up.  'What's this, Grandma?' Grandma Kate ran her fingers over the scratched lid.  'Do you know anything about World War One?' she asked."

Simpson and his Donkey by Mark Greenwood illustrated by Frane Lessac
"Jack was responding to a cry for help when he came upon a donkey cowering in a gully of pines."

The Afghanistan pup by Mark Wilson
"The solider suddenly stopped.  Just where he was about to dig was a little dog. covered in sand.  The pup wasn't moving, so the solider brushed away the dirt and discovered wounds on its legs and side. He could see that the wounds were badly infected ... He wiped the dust from the pup's face before dripping some water from his canteen into the animal's mouth.  It was soon time to go, so the solider picked up the pup and carried it to his truck." 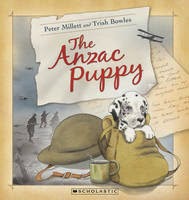 Vietnam Diary by Mark Wilson
"Jason sat bleary-eyed in his foxhole early one morning as the sun burst through the trees.  But something wasn't right.  There was no noise.  Then suddenly, explosions erupted throughout the camp."

The Anzac puppy by Peter Millet illustrated by Trish Bowles
You might like to read my review.

A day to remember by Jackie French illustrated by Mark Wilson
You might like to read my review.

I was only Nineteen by John Schumann illustrated by Craig Smith
"Townsville lined the footpath as we marched down to the quay. This clipping from the paper shows us young and strong and clean. And there's me in my slouch hat, with my SLR and greens. God help me, I was only nineteen."

Christmas in the Trenches by John McCutcheon illustrated by Henri Sorensen
You can read the lyrics here.  This book is one of my favourites.

Why are they marching, Daddy?  by Di Burke
Madi is watching the parade with her father. "Why are they marching, Daddy?" she asks. Madi's father tells his daughter the story of Anzac.  He talks about war too: "Is war bad?" asks Madi... Daddy answers by talking about the good and bad. The reasons and the consequences. He talks about freedom. This little book addresses the big issues simply and clearly. It's a great book to talk about what we are commemorating on the 25th April every year. 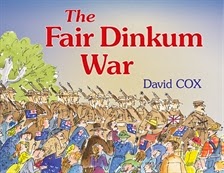 The Fair Dinkum war by David Cox
"Everybody had air-raid shelters at home, too.  Some were just trenches, like our, that filled with water when it rained.  But some kids had air-raid shelters they could boast about, with cups and plates and cupboards full of canned food that would last for weeks."

What was the war like, Grandma? by Rachel Tonkin
"There were posters pasted up warning of spies. Some people were so frightened they thought there were spies everywhere.  Albie Sodablom from the petrol station was beaten up because his name sounded foreign.  He changed it to Albie Blom.  Our family doctor, Dr Danzeigre screwed a new brass plate to the wall outside his surgery saying 'Dr C Danbyy' in case people turned against him too." 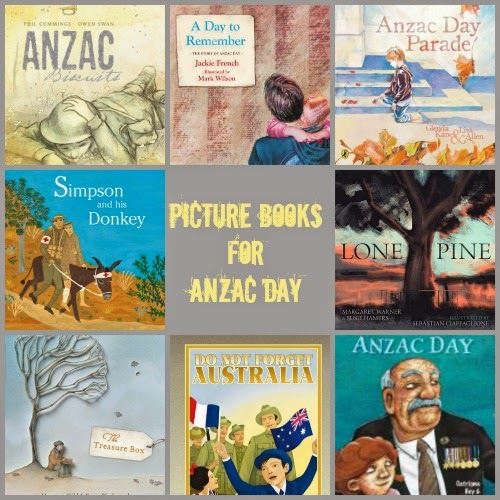 Well done. Someone needed to do this and you have done a great job and service to other librarians and teachers.