His Name was Walter by Emily Rodda

"It's not true that only children can enjoy a really good children's story" Emily Rodda ABC radio interview with Angela Meyer. 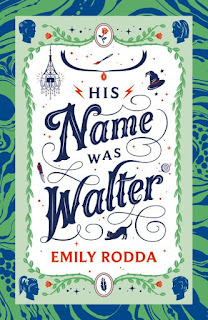 Australian author Emily Rodda is a true writing talent. You may be familiar with the Deltora stories and Rowan of Rin books.  Previously here I have talked about Bungawitta and The shop at Hoopers Bend.  My personal favourite among her books is Bob the Builder and the Elves which is a simple junior novel and a delight to read aloud. Now we have His name was Walter which the publisher says is for 8+ but for me is much better suited to upper primary and junior high school readers. This is a spellbinding story which I read almost compulsively.

This book contains, as the cover says, "a story with in a story".  Four students and their teacher are stranded on a remote country road after their excursion bus breaks down. The group take shelter in a derelict house. One of the students, Colin, admires a small desk in the kitchen. He knows furniture like this often conceals hidden compartments.  He takes a closer look and finds a secret drawer. Inside this drawer is a book with a dramatically illustrated story.

To three of the children the house itself feels so strange. There are noises and strong feelings that seem to impact them almost violently. They gather together and begin to read the book they have found. It reads like a fairy tale or folk tale beginning with an orphan of unknown heritage who is living in a horrible institution with little prospect for a happy future. He escapes from this situation taking two tiny things which might point to his identity - a paper which says his name is Walter and a few strands of hair. By chance he meets a beggar woman who tells him a little more of his history but it is the encounter with a kindly witch woman who really settles his fate.

She predicts:
"You'll never be rich in gold but your life will be rich in other ways ... You'll protect a friend. You'll find true love. You'll free a prisoner. You'll champion the weak. You'll save a life. You'll keep the faith. You'll ... "

Having begun like a folk tale, a rags to riches story, the focus then references Beauty and the Beast especially when we read about Lord Vane.

"The man was hunched jealousy over an iron box heaped with gold. To Walter's horrified eyes he looked more like a beast than a human being ... The filthy undershirt that strained over his massive chest and sagging belly was blotched with patches of sweat. Hair like greasy grey straw stuck up all over his head ... Evil greed seemed to cloud the room like smoke."

I especially enjoyed the way Emily Rodda drew all the threads together at the end of this book showing the links between the 'fairy tale' from the book and the past history of life in the house and town. I mentally ticked off each item and felt satisfied all the pieces of this puzzle were once again joined in all the right places.

Here is a review from Readings. The publisher have generously provided you with four chapters as a sample of the text. Here is a special video with Emily Rodda talking about her books and their creation and a very recent radio interview.  I will predict, in fact guarantee, His Name was Walter will feature in our 2019 CBCA short list. Yes, yes it is that good.

Thanks again to Beachside Bookshop for providing this copy.
Posted by Momo at 9:13 AM