Theophilus Grey and the Demon Thief by Catherine Jinks 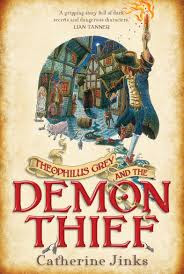 Some books are a sprint while others are a marathon.  Theophilus Grey and the Demon Thief is certainly a marathon read but the rewards are truly great.

Catherine Jinks is a modern day Charles Dickens.  Her turn of phrase, colourful character names, vivid descriptions of life in eighteenth century London and her ability to recreate the sights, disgusting smells and night terrors of the city are breathtaking.

"Philo hurried along Turnstile Alley, heading for the George Inn.  It was past midnight. Recent showers had turned the street into a swamp, so Philo took care to avoid the drain that ran down its centre.  Instead he stayed close to the mean little shops on his left which were full of second-hand furniture and household goods. .. Then a shuttered door slammed open, and someone dumped the contents of a chamber-pot out of a second-storey window."

Theophilus is better known as Philo.  He is an orphan in the tradition of the Artful Dodger of Oliver Twist fame.  Philo works for a cunning man called Garnet Hooke.  Philo and his gang of linkboys report each day to Garnet who gathers information like Fagan.  Garnet uses information about thefts in London to bribe officials and claim rewards.

A linkboy is a boy who carries a light at night to show the way to people in the city at night.  This story is set before the advent of street lighting and this activity alone greatly adds to the tension of the story.  The city is such a dangerous place and lately it has become even more dangerous as several notorious criminals are struck with a mystery malady causing them to fall into unconsciousness. Rumors are rife that a monster, a demon, called a spriggan is the cause.

This is a complex book to read but Catherine Jinks offers help in the form of a map, insightful chapter headings and a glossary.  Readers will encounter so many new and unfamiliar words in this book but the context helps you glean the meaning and because the story is so engrossing.  I mentioned previously Catherine Jinks skill with words.

"will you peach on 'em or no?"
"Val was rolling up his palliasse"
"In the past, Garnet had always been shielded from rebuke"
"It was quite busy thanks to a hurdy-gurdy player stationed near the livery stables."
"his leather breeches had to be cinched in at the waist with a piece of rope."

The descriptions in this book are excellent and could be used as a writing model with a senior primary class.  Here is a description of Susannah.  Philo will need all his courage and problem solving skills to save her from a dreadful imprisonment later in the story.

"She was nine years old and as frail as a cobweb, with bleached skin, hands like a chicken' s claws, and pale, silky hair.  It seemed to Philo that she must have been born in her draggled blue skirt and oversized stays, for he had never seen her in anything else.  During summer she sold fresh rosemary for a penny a bunch; in winter, the rosemary was dried."

Theophilus Grey and the Demon Thief is the first in a series of two books.  I am now keen to begin book two. 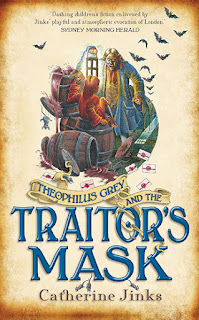 Here is a review in Reading Time.  Teacher notes are available from the publisher web site.

After reading Thophilus Grey and the Demon Thief I recommend The City of Orphans series which begins with A Very Unusual Pursuit (also by Catherine Jinks), Ruby in the Smoke by Philip Pullman and Barnaby Grimes by Paul Stewart.
Posted by Momo at 9:37 PM