Elizabeth and Zenobia by Jessica Miller

"I have always paid attention to words and the way they fill my ears. There are words I could hear over and over again, like seashell.  And there are other words, like custard,
that make my stomach flip." 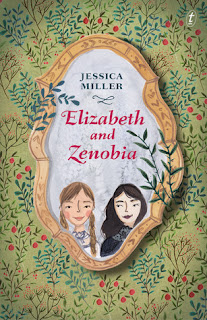 As this story opens Elizabeth is on a train with her father Henry Murmur and Zenobia.  They are travelling to Witheringe House.  This is the house where her father had lived as a child.  Father is a plant scientist. He is distracted and remote.  Elizabeth would love to have a close relationship with her father but since mother left he has become even more distant.  Elizabeth's only friend is Zenobia.

"Zenobia is not imaginary at all. It is true no one except me can see or hear her, but that doesn't mean I dreamed her up. Besides, as she so often likes to point out, it's unlikely that someone as dull or as timid as I could ever imagine someone like Zenobia."

Zenobia has an obsessive personality.  Right now she is following her passion for clairvoyance, prior to this it was fortune telling and in the following weeks she will become obsessed with poisonous plants.  It is Zenobia who makes Elizabeth explore this old house and including the forbidden areas. Late at night they find a room where the plants on the wallpaper appear to be moving.  When the rain finally stops and they explore the neglected maze they meet the gardener who seems intent on grafting strange plants in an almost maniacal way.  Then Elizabeth stumbles upon a mystery - the disappearance of Tourmaline. Here is her gravestone :

For middle primary students Elizabeth and Zenobia will be an absorbing read with slightly Gothic overtones.  The ending is a odd but I think readers just need to accept the 'happy ending' and not question how this is totally at odds with the gravestone quoted above.

In 2013 Elizabeth and Zenobia was short listed for the Text prize from 350 entries.

Here is a set of teaching notes.  You can preview some of the story here.  You might also enjoy The Old Willis Place, The Visconti house, The Haunting of Charity Delafield and The Humming Room. 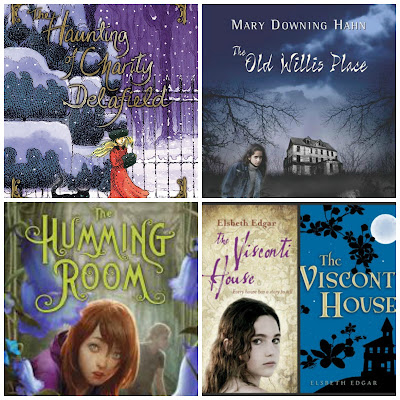