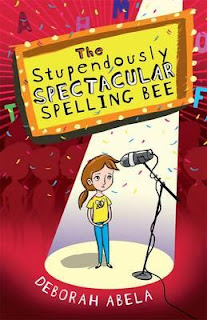 A few years ago a young student from my school won the NSW State Spelling Bee final.  I was in the audience, it was broadcast on the local radio and the whole event was thrilling.  In this book - The Stupendously spectacular spelling bee - India is also a champion speller but so far her talents have been limited to spelling in front of the television.

"India Wimple could spell.  Brilliantly. On Friday nights, she and her family would huddle in front of  the TV in their pyjamas, in their small house in Yungabilla, and watch the Stupendously Spectacular Spelling Bee."

As the story begins the family are watching the finals of the spelling bee on television.  The finals are held at the Sydney Opera House.  When the winner is announced the compare seems to look straight at India when she says the next spelling bee champion could be you!  And so their journey begins.  India competes at the district level, regional finals and on to the grand final at the Sydney Opera House.

The Wimple's are battlers.  Dad has lost his job and is working as a the town handyman.  The town of Yungabilla has hit hard times and so dad is mostly paid with baked goods and IOUs.  Mum has left her job to look after Boo, India's brother, who suffers from very bad asthma.  Nanna Flo has also moved in with the family.

When the family reach Sydney everything seems to fall into place.  Checking into the aptly named Hotel Grand the family are upgraded at no extra cost to the Grand Plaza Suite.  "There were four bedrooms with king-sized beds, a kitchen stocked with food and a spa the size of a small pool."  The contestants and their families are taken on a tour of Sydney which ends at Kirribilli House where they meet the Prime Minister.

"Outside, waiters were putting the finishing touches on an equally long table filled with trays of sandwiches and cupcakes and, in the centre, a bubbling chocolate fountain surrounded by strawberries and marshmallows."

India has two main rivals in the bee.  A boy called Rajish who knows he wants to be friends with India and a girl called Summer.  Summer is a lonely rich girl.  She is despicable to India and yet India finds a way to show amazing kindness.

Every chapter features a spelling word and definition.  Here are a few of them :

tremulous, disconcerting, valorous, endeavour, disquietude, perspicacious (one of my favourite words) and splendiferous.

I think I smiled from page one to page 232 reading this book.  This whole story is like a fairy tale - so many absolutely perfect things happen to the Wimple family and their talented daughter India. Yes there are some disasters - the car breaks down on the way to the regional final, Boo has an extremely bad asthma attack and has to be taken to hospital, India arrives at the grand final in her pyjamas - but magically everything works out.  The other feature of this book that I really enjoyed was the totally authentic Australian flavour.  When the family step out onto the balcony of their grand hotel room this is the view :

"It's like being on top of the world,' Boo said.  And it was.  For the Wimples at least.  They'd never been anywhere so high or so grand.  Dad pointed out all the famous landmarks. 'There's the Harbour Bridge, and the Royal Botanical Gardens and ... Luna Park!"

Here is a set of teaching notes.  This book would make an excellent class read-a-loud especially if your class are participating in a spelling bee.  You might also enjoy Bungawitta, The Big Bazoohley, Fortune Falls, and Speechless.

Click each of the quotes below to read more reviews.

This is a fast-paced and engaging book. Abela wonderfully captures the caring spirit of family and community.

Striving for a dream, using the support of those around you, taking one step at a time, believing in yourself and allowing obstacles to become opportunities

Ohhhh...I am so happy the Wimples made you smile. Thank you so much for your lovely review. Deb