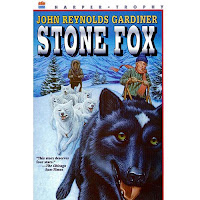 On first glance this looks like a simple short junior novel. It is in fact none of those things.  This is the story of little Willy who lives with his grandfather in the wilds of America in the mid nineteenth century.  Life on the potato farm is complex and huge debts have been accrued with the tax office   Willy's granddad does not know what to do and so he simply shuts down. He takes to his bed unable to move or speak.

Willy owns a very special dog called Searchlight. "Searchlight was a big black dog.  She had a white spot on her forehead the size of a silver dollar.  She was an old dog - actually born on the same day as little Willy, which was over ten years ago."

When his grand father will not get out of bed or respond to his surroundings, Willy calls the doctor.  It is clear something is deeply troubling the old man but the doctor says that while there is nothing wrong with him physically until they can find out the real worry he may just waste away. Willy is determined to keep the farm going including harvesting the potato crop. He does this with the help of Searchlight.  Then he sees a poster in town advertising a dog race.  The prize is five hundred dollars - enough to clear all the debt but Willy will be up against a serious rival an Indian man called Stone Fox.

This year I thought I would re-read some favourite or memorable books.  I am so glad I picked up Stone Fox.  This is a powerful story of love and loyalty and the final scenes of the dog race will linger with you long after you have closed the cover.

Here is a set of teaching notes.  Here is a moving trailer.
Posted by Momo at 8:15 PM