The Secret Zoo by Brian Chick 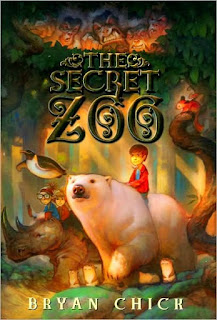 One of the things I enjoy doing is remembering how I came to find a particular book.  This seems quite difficult with an e-book.  With a paper book it might be that you borrowed it from a library - you can see the library stamp,  you might have been given the book as a gift - this is so special you will remember the giver or you might have bought the book for yourself in a bookshop - confronted with a myriad of choices you are sure to remember this occasion when you carefully selected this particular book especially since you have spent time looking at the cover.  None of this is true for an e-book so I have no idea how The Secret Zoo by Brian Chick came to be on my Kindle.  I certainly did not select it based on the Horn Book review as they gave it a four rating which is quite low. I would have given it a five!

I did say in my profile I would share favourite books and books I have read and enjoyed so I probably should not talk about The secret zoo since I think it is one of the most disjointed and messy books I have ever read.  At the end of this story you really know nothing about the three main characters, you have no sense of relief when Megan, Noah's sister is found just as you had no real concern that she was missing from her family home for three weeks.  The animal characters in this book are simply odd.  They understand humans and share some special bond but they cannot communicate with the children except at a very rudimentary level.  The animals have very corny names the polar bear is Blizzard, the overweight large penguin is Podgy, Mr Tail Tail is a langur monkey and Little Big Horn is a rhino.  Speaking of names I kept expecting the name Noah to have some huge significance but it doesn't.  The final laugh for me came when the author had koalas sitting in trees keeping watch doesn't he know they sleep most of the day.

I don't want to try to describe the plot except to say I did like the idea that animals in the zoo had a secret and much better life in another place accessed via tunnels and magic curtains. This is quite a long book, it has disjointed twists and turns especially towards the end and very strangely involves a huge battle with a large number of Sasquatches in the final chapters.  We do not have this book in our library but if it sounds good I am sure you can find it.  There are four books in the series.  The Kirkus reviewer sums up my feelings :

While the plot has page-turner potential, the narrative gets mired down in description, costing the novel much of its sense of suspense. Chick dwells far too long on the history of the zoo and traveling through the intricate system of portals and far too little on developing characters and building a sense of urgency—two things that would go a long way toward keeping readers invested in the story.
Posted by Momo at 9:30 AM